The Bennett Blazers Forging a unique athletic community and, in some cases, blazing a trail to the Paralympics. Olive Weidenhammer’s mother Elizabeth recalls her three-year-old daughter’s excitement before joining big sister Willow’s basketball league. But Elizabeth could tell Olive was also a little nervous. Whatever fears Olive may have harbored, they appeared to dissipate the moment Olive saw her new teammates.

“Mom!” Olive exclaimed. “Everyone here’s in a wheelchair like me!”

The Bennett Blazers isn’t an ordinary sports program. Since 1989, the program has engaged children who might have been sidelined onto the field of play with wheelchair track, baseball, sled hockey, swimming, softball, tennis, archery, golf and more.

Founder Gerry Herman brought the program to Baltimore’s former Sinai Children’s Hospital from Massachusetts. A Boston-area native, Herman was always athletic. “I was on the professional football track, and got involved in a charity working with kids, teaching them skills and sportsmanship.” When pro football didn’t pan out, Herman’s love of working with children informed his plan B: a degree in adapted physical education, and a job in a Massachusetts school for kids with challenges. “I was in the right place at the right time,” Herman says. “I got in on the ground floor of the movement to bring PE to everybody.”

Herman quickly noticed the benefits of his adapted sports program reverberating throughout the participating kids’ lives. “The [physical therapists] would say: ‘We can’t get kids to do their [physical therapy exercises],’” Herman remembers. “We’d give the kids a sport they loved, and tell them: ‘Look, you need to do your [exercises] so you can play defense.’ And they’d do it. [As motivation,] it’s a lot more effective.”

Now the Bennett Blazers are affiliated with the Kennedy Krieger Institute. Herman and his wife Gwenna run a multi-sport program, three days per week. “The kids learn everything. … They see what they can do before they develop a favorite,” says Herman.

Saturdays are all-day, multi-sport affairs. Amy Thomason, mom of Sean, tries to remember her son’s Saturday routine: “It’s basketball, 10 to 11, then swimming 11-12, then lunch. Then sled hockey for two hours. I don’t know how he does it!”

“Saturdays are the long days,” Elizabeth agrees. “But [Willow and Olive] love it.”

Willow says she enjoys having her younger sister join her for wheelchair basketball. Herman says: “At first, we didn’t take kids until they were seven, then it was five, then the age kept going down. Now we take kids as young as 20 months.” With advances in prenatal testing that detect rare conditions early in pregnancy, the program now gets referrals when the kids are in utero.

In the spring, Herman says, they’ll rotate the schedule and add outdoor sports such as tennis, softball and track. As kids get older, they’ll start to specialize, or spend more time with their favorite sport.

Some – more than a few – even go on to become champions.

Bennett Blazers is alma mater to 12 Paralympians, including alumna Tatiana McFadden, a seventeen-time Paralympic medalist and one of Forbes magazine’s 30 under 30.

Daniel Romanchuk, home in Maryland after returning from his first Paralympics in Rio de Janeiro, still plays with the Bennett Blazers.

Daniel is hard pressed to name his favorite sport: He loves basketball and track; went to the national championships in Nordic skiing; and competed in wheelchair track in Rio in the 100, 400, 800 and 5,000 meter races. He didn’t expect to medal…this time. But he has a gleam in his eye when he talks about his training for the next Paralympics in Tokyo. He credits the Bennett Blazers, and coaches Gerry and Gwenna, for getting him involved in sports.

“Gwen and Gerry taught me to push myself 100 percent. It was never about winning. Whether you win or not, if you’ve given 100 percent, you’ve won,” Daniel says.

All ages, from now-four-year-old Olive to nineteen-year-old Daniel, played in a recent tournament on Kennedy Krieger’s west Baltimore campus.

Amy Thomason, whose son Sean was participating in the tournament, explains: “They pair up the older kids with the younger kids. So you’ll see these friendships form.” The friendships made here are different than the ones they have at school, Thomason says. Although Sean has friends from school, he’d never been invited to someone’s house before joining the Bennett Blazers. “The parents get afraid, or worried, about accessibility and helping Sean. They don’t know that he doesn’t need help. He’s independent.” The Bennett Blazers kids, Amy continues, “all just get it. Whatever medical issue you happen to be having that day, they’ve been there too. And they understand what it’s like to have two hours of treatment on top of homework.” Here, she says, Sean is just one of the guys. “This is a bond that will last forever; they’ll be in each other’s weddings; they’ll be friends the rest of their lives.”

Elizabeth agrees. “The best thing for me is getting plugged in with all the other moms and dads,” she says. Amy adds: “It’s a community. We help each other out.”

The NFL’s loss of pro hopeful Gerry Herman is the gain of many hundreds of kids, including the 165 current Bennett Blazers.

Herman has a theory regarding the success and longevity of the program? “It’s easier to teach than to un-teach. We teach them they can—before they can be taught that they can’t.” 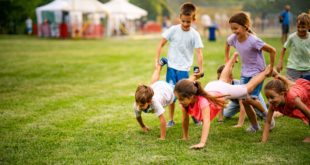 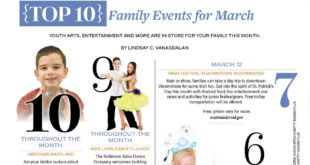 Top 10 Family Events for March Youth arts, entertainment and more are in store for your family this month 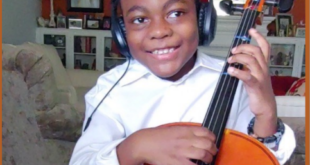 A ‘Baltimore’s Child’ Through My Eyes