Your Special Child: Defying the Odds

In the July issue of Baltimore’s Child, we introduced you to the adorable Kayleigh Hope Klatt, a sweet and sassy 2-year-old with an unbelievable story. Born 94 days early and weighing less than a pound, Kayleigh was the smallest baby ever delivered in Maryland—and though she has done better than doctors could have dreamed, she still struggled: Her neck bore a tracheostomy tube, she ate primarily through a feeding tube, and she could not speak.

Despite it all, her parents Nicole Bent and Jacob Klatt remained optimistic—and now, just six months later, that optimism has paid off: Kayleigh’s trach tube has been removed.

But while it may seem that Bent and Klatt’s reactions would be nothing but euphoric, Bent’s initial response was less enthusiastic.

“I was nervous and scared,” she says of the doctor’s clearance to remove Kayleigh’s tube. “I had always looked at it as her lifeline, and I’ve never known her without some sort of respiratory support.”

The surgery was successful—and now, after some time to adjust on the part of the entire family (post-operation, Kayleigh was constantly reaching at her now-bare neck), those anxious feelings have been largely replaced.

In fact, Kayleigh’s health is improving in nearly every way. She recently underwent an intensive feeding program at Mt. Washington Pediatric Hospital, and is now eating about a quarter of her food orally. (Bent says her daughter is particularly fond of crunchy foods, like pretzels and Cheerios.)

Her communication, too, has vastly improved. Though Kayleigh is still largely non-verbal, Bent says she recently said the word “ball,” and has been making continued progress with sign language and her communication board (a board containing pictures that Kayleigh can point at to show what she wants).

The best part? Things will only continue to get better. Kayleigh was recently admitted to PACT, a medical day care at Kennedy Krieger that Bent believes will be instrumental in her daughter’s development.

New Year’s Day will mark the sweet toddler’s third birthday. And while Kayleigh can’t have too much of a party (as she is “pretty much on lockdown” during flu season), her mom is taking the opportunity to reflect on the past year and plan for the next.

“I feel like we’ve reached so many goals already,” Bent says. “She learned to walk, her trach came out, her medication has been significantly reduced…I just want her to continue to progress.”

Her ultimate goal is to have Kayleigh’s development reach “mainstream” level by her fifth birthday. Though doctors have neither supported nor condemned the possibility, Bent is determined to help Kayleigh get there.

“She has already exceeded everyone’s expectations,” she says. “She was still supposed to be on the ventilator, and she just had her trach out.”

In fact, defying the odds is a key part of Bent’s parenting strategy—something she recommends to all parents of disabled children she meets, many of whom have been inspired by Kayleigh’s story and progress and are keen to hear how Bent helped to facilitate it.

When it comes to pushing, though, patience is key.

“Sometimes I get frustrated if we’ve been going over the same assignment for weeks and weeks, but then she just gets it,” Bent says. “Even ‘typical’ kids aren’t getting it the first time—it’s just that their parents aren’t tracking every move and focusing on everything, so it can happen much more naturally.”

Another key piece of advice? Follow-through is everything.

“Whatever they tell you to do, you actually have to do it,” she says. “It’s not like having a typical child, where you can say, ‘Oh, I’ll give them their medicine later.’ You have to follow up with doctors, therapists, medications, feeding schedules…whatever the doctor says, you do.” 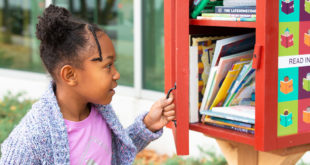