Most of the students in Bridget Flynn’s class at the Delrey School — a small private school that serves around 30 children with disabilities — are nonverbal and require one-on-one care from staff and teachers. But every other Friday, students turn the tables, as they plan, make and serve lunch to the staff, running their own “food truck” from their classroom.
Patti Kurek, a speech pathologist at the school, says the idea grew out of a dessert-making project for Our Daily Bread. “It was an opportunity to give back,” Kurek says. “We’re so often on the receiving end.”

After that project’s success, Kurek says teachers and staff were talking and brainstormed about trying “something on a bigger scale, here in house.” Maybe even a lunch. “It was just one of those things. We were like, ‘OK, let’s try it,’” she says, adding that, from there, “it took on a life of its own.”

The life it has taken provides an array of occupational, physical and speech therapy exercises for students. But perhaps most importantly, it provides agency: an opportunity for students to make decisions independently and express themselves.

For students with complex communication needs, that’s a big deal, Kurek says. The food truck “is a start-to-finish activity they are highly involved in and highly motivated to participate in.” It’s become popular with the staff, too, she says. “We’re a very small school, and [recently] we had 25 lunch orders, so we’re tickled with it.”

On a recent Friday, visitors could find the food-truck experience by following the smell of Mexican cuisine down a school hallway to a classroom buzzing with activity and people.

Four long, rectangular tables have been pushed into a square in the center of the room, where an ad-hoc assembly line of students and their helpers prepare the quesadillas.

Flynn stands at the electric grill, helping a student named Nick flip meat with tongs. “This is where it gets a little dicey,” Flynn says, laughing. “I’m not gonna lie!”

“We have 24 orders today, and we’ve done six of them so far. The students are involved from start to finish, planning what we’re going to make, making up a menu and doing it.”

To Nick, Flynn says: “These are looking beautiful!”

In preparation for the food-truck meals, Kurek explains, the teachers and staff give students a list and say, “Here are some options.” After that, the adults step back. Students “use their communication devices, and they take a vote.”

As a class, the students tabulate which meals receive the most votes each week. Then, they consider toppings or side dishes, and again, they vote. Next, they choose what jobs they’d like, including being grill master for the week or frying up the bacon for the burgers. Some students are in charge of picking the music for that day; others assemble meals or chop ingredients.

“Most of them have different jobs programmed on their communication devices so they can indicate what they like to do,” Kurek says.

“Once we have everything,” she adds, the occupational therapist prints out a menu. Kids then go around and take orders from the staff, using bingo markers on the menus to indicate choices. Afterward, the group decides how much they need, and the teachers go shopping.

Cooking begins in the late morning on Food Truck Friday. Kurek’s job is to make sure the students have the words they’ll need programmed into their communication devices.

“As a speech pathologist, I’m doing all the programming, I’m encouraging all the communication, and I’m updating the vocabulary, depending on what that particular menu is that week,” she says. “I’m encouraging kids, positioning devices and making it accessible for them so they can be successful.”

During lunchtime, she works with the kids to help them greet and thank their customers. Some key phrases include: “Order’s up,” “condiments are over on your right” and “thank you.”

That means she also reports for food prep duty. “I’m right there chopping and peeling with the best of them,” she says with a smile.

As Kurek helps a student named Kiara add cheese to quesadillas, Flynn converses with Nick via his device. She asks him if he likes quesadillas (he does) and what he wants to do next. “He wants to cut,” Flynn says. She calls out to the other students and helpers: “If somebody else wants to grill, Nick can cut!”

But first, an order is ready. “Let’s get this up for Miss Beth,” Flynn tells Nick.
Delrey student William and his one-on-one assistant, Patrick Rich, stand at the front of the assembly line. “Will’s job is to get all the materials together and put them out,” Rich explains. “Will is the go-to today.” Rich smiles and says, “I love Will. We’ve been together a long time.”

Next to him, occupational therapist Amber Sherrod helps another student, Ryan, who is nonverbal but communicates, in part, by moving his head to one side or the other to answer yes-or-no questions. Right now, he is putting on toppings, but “this morning, he grilled,” Sherrod says proudly.

Shakira McKelvin is Aaron’s one-on-one aide. “We’re putting on the chicken and the black beans,” she explains. Later, Aaron will deliver orders. “Aren’t you a people person?” she asks. Aaron smiles and, through his device, says yes.

The students don’t charge for the food they create, but they do ask for donations from their customers, Kurek says. “They’re going to take the money they’ve raised and do either a class project, a class activity or maybe purchase something for the classroom.”

But the rewards are more than monetary. While Kurek says “it is an exhausting day, to say the least,” the experiential learning opportunity is invaluable. “We’re using numbers, we’re measuring. It’s a multidisciplinary approach. We all have a hand in it. It’s not just fun and games. Although, that is part of it.”

Sherrod agrees, “This is a fun way to work on hand skills and pre-vocational skills at the same time.”

Sherrod walks over to help Kiara at the cheese station. “With Miss Kiara, she’s working on holding onto the cup, turning her wrist to pour, holding onto the knife and pulling back with the knife,” she says. “They need a lot of assistance, but this is a way for them to be involved and to still have it be meaningful. It’s a lot of fun.” 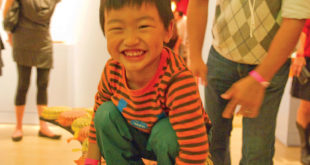 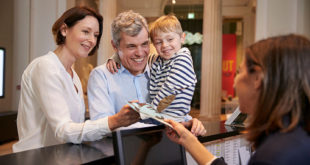 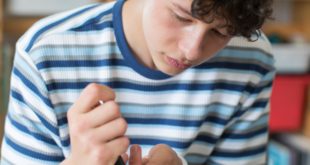