Five-year-old Vaughn Barrier has always wanted one thing above all others: to play basketball alongside his dad, with whom he also shares a name. With a basketball coach for a father, Vaughn inherited an innate love for the game, according to his mom, Khalilah Barrier. But a progressive disorder that causes low muscle tone and instability has blocked Vaughn’s shot.

Until, that is, Vaughn’s mom wrote to V-LINC, a local nonprofit that harnesses the skills of engineers and engineering students and puts them to work solving problems for people with disabilities. The volunteer engineers at V-LINC think they can get Vaughn dribbling, retrieving and shooting basketballs courtside while Dad coaches. This challenge is assigned to a team of undergraduate engineers from the University of Maryland, Baltimore County who will work for class credit, with support and mentoring from V-LINC’s other volunteers.

Vaughn’s mom discovered V-LINC through Vaughn’s therapy team at Kennedy Krieger Institute and submitted a request through the organization’s website. From there, V-LINC’s review committee vetted her request for feasibility.

If a request is deemed “safe and possible, it’s a project,” McGraw says. The project is then assigned to a team that creates specs to determine how long the project could take to design and build, how much it will cost and what materials will be needed. Then, the student engineers on a team begin meeting with their clients.

Andrew Galbreath, a UMBC senior who was set to graduate this spring, instantly knew that for his senior capstone project he wanted to help Vaughn play basketball. “As soon as [my professor] listed project ideas,
I knew I wanted to work on this. I love basketball, and I love little kids,” he says.

Galbreath says he met with Vaughn and his family “five times or so” during the development process, “asking questions about what they wanted, ironing out requirements as we made different prototypes, making sure he’s happy and comfortable.”

“Vaughn always seemed happy when we came around,” Galbreath says, and the feeling was mutual. “He loves basketball. He loves all kinds of sports. We spent plenty of time with him and the family and got to know them pretty well.” When the students brought prototypes to Vaughn’s school, Vaughn would “get right in and start shooting hoops. He enjoyed it a lot.”

Galbreath says working with Vaughn and his family on this project was “one of the most fulfilling experiences of my life. I love the idea of using my engineering skills to help people.”

Galbreath and his team came up with a “basketball stander” for Vaughn. Galbreath and project mentor John Haug presented their near-complete device at the March meeting of V-LINC’s project review and approval committee, or PRAC. Coincidentally, the meeting was held at UMBC’s Retrievers Activities Center in a room right next to the basketball court, home to the men’s team, which pulled off a stunning NCAA Tournament upset in March by being the first 16th seed ever to beat a No. 1 seed (the University of Virginia).

Haug, a retired mechanical engineer living in Harford County, chairs PRAC in addition to working on individual projects such as Vaughn’s. At the collaborative PRAC meetings, engineering teams report on their progress, discuss challenges and take questions and ideas from the larger group.
Haug joined V-LINC “almost immediately” after he retiring from his job at Aberdeen Proving Ground, he says. Before that, he designed carburetors for Ford Motor Company. From this experience, he knew the group’s first challenge would be to find a way to keep Vaughn upright and safe.

“We used a rock-climbing harness,” he says. “It could hold a car in addition to Vaughn. Then, we added padding for safety and comfort.” From the harness, Vaughn could pick up and toss toy basketballs into a hoop. A tilted net captures and returns the tossed balls. Like a portable play yard, the stander has wheels on one side and can collapse flat, so Vaughn’s dad can pack it up and bring it to the court.

V-LINC volunteers also are working on a basketball project for the Maryland School for the Blind. Engineers are experimenting with different beepers in a ball, so blind students could play four square or shoot baskets. Additionally, there are always bike projects. In fact, the group gets so many requests each year for modified bikes that they hold two to three bike clinics annually.

In April, after a few more tweaks from Haug and Carolyn Chanoski, a volunteer physical therapist, the basketball stander is ready to help make Vaughn the happiest pre-kindergartner at Seven Oaks Elementary School.
Vaughn’s mom welcomes volunteers to the family’s Parkville home on a Wednesday evening to present the basketball stander to him. It’s dinner time, and Vaughn’s older brother is cooking spaghetti. Vaughn’s younger sister is running through the house with her friends, excited to see all the people in her home.

But Vaughn is most excited of all. Smiling broadly, he tries to climb in and reaches down for the toy basketball, but Chanoski slows him down, buckling him into his harness. “Stand up tall! Nice and big for me! There you go!”
“I’m the medical person,” she says. “I’m always looking at it from the medical side.” From that perspective, she considers whether a project is going to be adaptable or have to be redone in six months. The official name of Vaughn’s disability is a multisyllabic mouthful — hypomyelinating leukodystrophy — and it will progress.

“Knowing that he has a motor disease that will cause him to lose function, we didn’t want to build something he could use now but a year from now not be functional,” Chanoski says.

Barrier says she loves the end product, which will allow Vaughn to safely play. “His balance isn’t the greatest. If he tries to squat, he just falls. It’s really cool that he can do what he loves safely and not hurt himself,” she says.
Vaughn, now settled in the harness to Chanoski’s satisfaction, leans over and picks up his toy basketball.

The new basketball star is ready to take a shot. 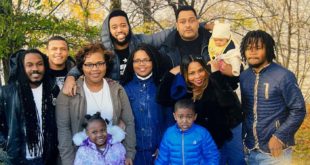 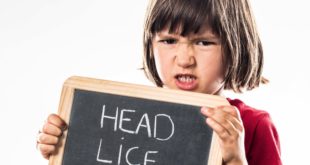 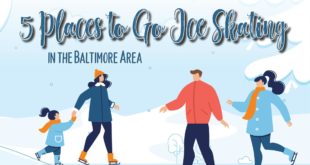 5 Place to Go Ice Skating in the Baltimore Area 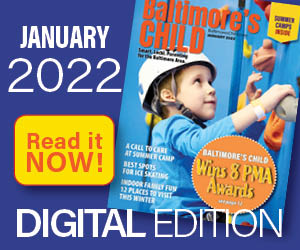