The Healing Touch Theater as Therapy for Students with Special Needs

The buzzing fluorescent lights are turned off in a classroom at the William S. Baer School, a Baltimore City public school for children with severe disabilities. Today, the room is lit like a day spa, with shades drawn, fairy lights twinkling and a pink tapestry bathing the room in a warm, rosy glow. If, as Shakespeare said, “all the world’s a stage,” Joanne Margolius, founder and creator of the Magical Experiences Arts Company (MEAC), has invited her audience into her world.

Margolius, whose cheeks sparkle with spirals of glitter paint, wears a green dress that could have been swiped from the closet of a Disney princess. Long skirt swishing, she gestures with movements so fluid they’re more of a dance, incanting her story in a cadence that mimics the tempo of the soft music playing behind her.

Margolius touches some students’ hands and arms and kneels on the floor in front of their wheelchairs to speak directly to them. Today, in her play, “Fairy Queen,” she offers “fairy dust” in exchange for their help and friendship. Some students can reach for the confetti. For the students who can’t, Margolius takes their hand and sprinkles the confetti so they can feel the sensation on their palm or arm.

Saniah, a student with limited mobility and intensive medical needs, would appear sleepy to a casual bystander. But Saniah’s eyes reveal she is alert and following every one of Margolius’ movements with her eyes. When Margolius sprinkles the fairy dust into her hand, she smiles.

“They have something in them that we don’t,” Margolius says. “It takes so much for us to be satisfied. When I sprinkle their hands with confetti, it just gives them this joy, this incredible sense of happiness. They have a joy of life most people don’t have.”

The goal of MEAC is to bring “accessible, therapeutic theater to children who have the most severe forms of disability and are not served by the traditional art groups that work in education,” says Margolius. For decades, Margolius has brought theater into schools, such as the Baer School, the Delrey School, The Chimes School and the Maryland School for the Blind, where it used to enhance children’s lives “not for entertainment, but for therapeutic purposes.”

Margolius, who is from London, was studying fashion design at what is now Middlesex University, when, in the summer of 1985, she “volunteered for one of the oldest drama therapy groups in England, based in central London,” she remembers. “I only volunteered because I saw the word ‘theater.’ I didn’t see the word ‘disability.’ I walk into the garden of this building, and there is this group of very severely disabled teenagers, playing music. I had one of those thunderbolt moments. I had never been around children with disabilities, and I felt his immediate connection to what they were trying to communicate even though they couldn’t speak. I went home and had this vision, or dream. I felt I needed to spend the rest of my life being with these children.”

After her internship, Margolius “walked into college and basically told them I was not coming back.” Her new mission in life “was to create a whole new therapy method that would enable children to express their feelings and have theatrical experiences that I felt could really enhance their lives.”

Although the drama therapy activities where she interned were “fun” for the kids, they weren’t always “meeting the children’s emotional needs. My connection with these children was constantly telling me they have a lot of difficult emotions they couldn’t fully express. I sat down and typed out — on my old typewriter — the mission statement of what I wanted to achieve.”

Margolius, then just 19 years old, “took this three-page letter to the local arts council in London, and they said, ‘This sounds amazing.’ So they gave me a small check. It was really tiny, but it was enough to get MEAC off the ground.”

Within a year, Margolius says, “Europe was reaching out to me and saying, ‘Can you come to Amsterdam, Sweden, Germany … the Europeans were really excited to see that there was this new method for working with severely disabled children.”

Margolius moved to America in 1994, where she found she had to start new with her theater company. Art therapy was “not thriving” in America at the time like in Europe, Margolius says. But in 1996, the president of the Maryland School for the Blind, “saw the work as something that could really fill a gap.” He offered her a volunteer position for one year and after that year hired her to provide the same services for students.  Margolius, and MEAC, stayed for the next 21 years.

Although Margolius hires other artists to work with her, she works solo at her Baer School residency. Baer School teacher Marie Amodia heard about MEAC two years ago and sought funding to bring the program into her classroom.

“For most of my kids, attention span is the issue,” Amodia says. “The first year, we noticed the program improved student attention span,” in part, because the music helped students to calm down and focus.

Margolius also worked with Amodia to choose plays from the repertoire of 21 subjects and adapt them, “tying them into the lesson,” Amodia says. The way children responded “was just amazing.”

One of her students “cannot sit down” for long periods, Amodia says. “We give him frequent breaks. The first session, she synced the play with our reading, ‘The Ships of Troy.’ The seventh-graders are reading Greek mythology. He sat down the whole 40 minutes and waited his turn.”

Margolius, Amodia adds, also “consistently uses our core words” on the children’s communication devices, making it “very easy for the kids to interact with her.”

This interaction includes plenty of touch, either initiated by Margolius, who would stroke a child’s hand or cheek, or by the students, who, to Amodia’s surprise, would hug Margolius.

“Human beings flourish better when touched. The more severe the disability, the less likely they are to experience it,” Margolius says. When someone has a severe disability, “touch tends to be about feeding and changing, not to convey emotion or love.”

Amodia’s favorite MEAC performance was the one most recently shown in her class, “Fairy Queen,” featuring the princess in the green dress.

“‘Fairy Queen’ is an Elizabethan drama, a little bit ‘Midsummer Night’s Dream,’” says Margolius. In ‘Fairy Queen,’ the “message is being courageous and finding ways to reach your full potential. It uses fantasy, as Shakespeare did, to get across his message.”

In it, Amodia says, Margolius “tied up every emotion: love, sadness, friendship, peace.”

“In Buddhism,” Margolius says, “the concept of tonglen means to take suffering and replace it with relief. When I read that I thought, that kind of feels like what I’ve been doing for 32 years, reaching out and connecting and replacing suffering with relief, acknowledging that there’s suffering but telling them, you also have a brave and courageous gift to give this world.”

When Adranisha Stephens isn’t chasing down a story, she is traveling, blogging, photographing or spending time with family and friends. She has a bachelor’s degree in mass communication from Frostburg State University and a master’s degree in journalism/digital storytelling from American University.
Previous Respect the Fruitcake?
Next Hi ho yo yo 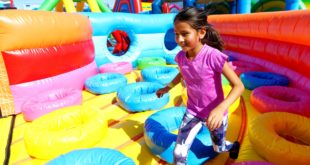