Children have always had a special connection with animals. Nothing makes little ones light up more than the opportunity to visit with of their furry friends, from class field trips to the farm to family zoo excursions, or even just feeding ducks at the pond.

Now you can make running errands with your kids more fun with these shop pets to visit throughout Baltimore County. Dogs, cats (and sometimes, birds!) will be greeting guests, keeping a watchful eye over business, or simply being the best mascots they can be.

Find a store near you below and meet a new friend!

Catonsville Dog Co., Catonsville
A 16-year groomer in Catonsville, Blair Nagel is going on her ninth year at Catonsville Dog. Co. Many of her own dogs were adopted from clients who could no longer care for them, including Molly. Each of her three shop dogs “kind of have their own self-appointed job,” checking on the other dogs, acting as Nagel’s personal assistant and greeting guests, she says. Lua, a former magician’s dove, is a weekly guest and children’s favorite. “I always tell people I’m a dog person by profession but I’m a bird lady by heart.”

Best Day Ever, Canton
Morgan Chapin opened Best Day Ever in 2017, inspired by the many gift stores she used to see downtown where she grew up in Maine. When she moved in with her best friend and sister in Baltimore, the one caveat was that her sister have a dog— but her sister couldn’t bring him to work. Baxter was only a pound and a half when he started sleeping on Chapin’s counter. Now 3½ years old, customers almost don’t see him. “Mostly they ask, ‘Is he real?’” Chapin says, because he’ll pass out on the counter, or stare until people notice him. “He needs to be seen, and he needs to see people.”

Charm City Run, Fells Point
Josh Levinson loved the community feel of his local running store in Texas, so he created a similar space in Timonium. The Levinsons now have eight stores in Maryland and one that opened in Rehoboth Beach, Delaware, in July. Ceiri manages the Fells Point store with her partner-in-crime Bronx, a French bulldog she and her husband got from a chance meeting on a hike in Colorado. With three dogs at home, Ceiri knew Bronx needed to be a shop dog. He tends to ignore people but “he follows the sun around the store,” she says. Bronx loves children and treats from Dogs of Charm City walkers.

Pet Care Extraordinaire, Parkville
A groomer since 2002, Hilary Fosler was among many who had been furloughed from PetSmart during the pandemic. She bought an old shop and hired many of her coworkers—keeping its previous name but putting her 10-year-old dog Louie on the logo. “He’s the Walmart greeter of Pet Care Extraordinaire,” she says. Two John Waters films were filmed on-site (there used to be a shed of memorabilia out back), hence the name of shop cat John Waters—JW for short. The other cat, named after ‘90s singer Sisqó, loves to greet people and paw at the dogs on her table.

ClayGround Studio & Gallery, Ellicott City
Old Ellicott City was ravaged by floods in 2016 and 2018—which led the previous owners of ClayGround’s studio and workspace for glass, clay, glass fusion and mosaics to sell. Luckily, an early morning dog walk inspired Kaplow and his wife to buy. Had they slept in, he reasons, they might have been thinking more clearly. Their 65-pound chocolate lab, Dakota, is “not the bull in a china shop that you would expect,” he says. It’s almost as if she has a professional persona. Her only vice: asking to be petted while people are on the pottery wheel. She ends up looking “like pretty much a Dalmatian.”

B.C. Brewery, Hunt Valley
Rich and Sarah Mak opened up B.C. Brewery with head brewer Jim Wagner in 2018, and several months later, their general manager, Thomas, got Phoenix from Baltimore County’s Working Cat Program. In exchange for shelter and care, cats keep your business pest-free. They were told their 8-month-old feline was too old to bond with people, but within two weeks, she was nuzzling up against guests. “Might have called it a little too soon,” Thomas jokes. Now, she’ll venture out on a busy Friday night or occupy her favorite spot under the brewer’s desk.

Corradetti Glassblowing Studio & Gallery, Clipper Mill
Ever since Anthony Corradetti moved into his Clipper Mill studio in 2005, his pups have been with him. The longtime glassblower (and subject of last issue’s Artisan spotlight) began working in Baltimore about 20 years earlier. His labradoodle Bruno and schnauzer-poodle mix Romeo love everyone who comes in, he says. “It adds a lot of warmth and personality to the studio to have them there to greet people.” Through the studio’s open-air space, community members will give them a friendly pat as they pass by.

Ace Hardware, locations in Waverly, Canton, Federal Hill and Takoma Park
Ace Hardware is an employee-owned co-op with 13 locations in Washington, D.C. and Baltimore. All adopted from Animal Allies Rescue Foundation, the cats that prowl four of these stores are “also very valuable employees to us,” says Belew, director of marketing and business development. They keep mice away and add in some personality. The most famous is Decker, in Federal Hill, who has quite the social media presence, Belew says. To name each cat, staff came up with hardware themes—such as Benjamin for Benjamin Moore paint—and put them to a community-wide vote.

Charm City Millwork, Baltimore
The son of a custom builder, Mullins hadn’t been planning on taking over the family business, but he was always building furniture, even at a young age. He opened Charm City Millwork in 2010. Its focus is finding unique and challenging woodworking projects, including sculptural metal work. “I always wanted a dog that was going to be like a companion—that could just go anywhere with me,” he says, and working about 16 hours a day, making Brooke a shop dog made sense. You can find her carrying around her ball or rope toy to play fetch, or curling up in Mullins’ office.

A version of this story was originally published in our sister publication, Baltimore Style. 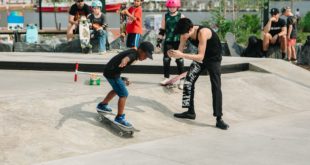