Victoria Harvey is a Baltimore’s Child intern and a high school senior. As part of our series on teens and partying, we asked her to interview other teenagers about their thoughts on drinking. Most
of the students interviewed are seniors or older, and at a point in their lives when underage drinking is more accessible. For all teens interviewed, it is an issue they have considered, whether to drink or not.

It has been a longtime American ritual for teens and young adults to participate in underage drinking. From drinking at parties to “pre-gaming” before football games or school dances, underage drinking is often seen as a rite of passage. But is it a given?

Recently, I had the opportunity to talk with some teenagers in and around Baltimore and the Washington, D.C. suburbs to find out their thoughts on underage alcohol use, and immediately it was apparent that not all of today’s teens engage in underage drinking. High school senior Elyse, for example, says she chooses not to drink because she doesn’t “like the feeling of being drunk.” “It messes up your functional system,” she says and is simply something that has never interested her.

The Centers for Disease Control, in a 2017 study of risky youth behavior, found that about 30 percent of high school students had consumed alcohol within the survey’s previous month, and 14 percent had participated in binge drinking. Teenagers BC spoke with gave a variety of reasons for drinking. Some said it was simply to have a good time.

“I drink at parties sometimes,” says Maria, senior. “I’m not sure why, it’s just good.”

Another student said she started when she was 16, “because I wanted to.”

Ethan, a freshman at Case Western University, said he chooses to drink “because I trust myself to know my limits” and added that drinking is not a necessity to having fun. “I think there is too much of a stigma surrounding alcohol and that contributes to the mysticism and draw of alcohol. If you allow kids to drink freely — lowering the drinking age to 18 — you dispel the stigma, and eventually the draw of alcohol as a tool of rebellion will  be dissolved.”

For now, of course, the legal drinking age is 21. So, where does most of this generation’s underage drinking take place? Most said at parties, fraternity houses and college athletic events.

Maria said while she mainly drinks at parties hosted by friends, there are also times where she enjoys the occasional glass of wine or champagne over dinner at home or at family parties, which according to Maria, her parents condone. Just because underage drinking is illegal does not prevent kids from having access to booze, says senior Harshitha. “Drinking at home while underage may be wrong, but nothing can be done if no one is aware. It’s a rule that’s placed but not necessarily enforced, unless caught.”

Despite their young age, many students say it is possible for them to manage drinking with schoolwork and other activities. “I’ve seen people at school participate in underage drinking and still manage to get good grades, and maintain a steady after-school activity life,” says Aneisa, a high school senior.

Kaylee, another senior, agrees. “I think it is very possible for someone to drink underage and it not affect their school work solely because some people are good at hiding their habits, and as long as the drinking and partying doesn’t replace the time used for school work, I think there can be a balance. That doesn’t mean I think it’s right, but I do think it’s possible.”

“I believe you can balance it because I consume it, but not heavily enough that it would prevent me from any day-to-day activities,” Doyinsola says.

And Ethan says students shouldn’t feel the need to “get blackout drunk” every time they drink or use any type of drug. “Then you have a problem,” he says. “Everything in moderation is the key to a healthy mix of fun and business.”

But Elyse says drinking “messes with how you think,” and that kids still do it because they don’t think about that when they are at parties or other events where alcohol is introduced.

Though these comments may come as a shock to some, Irene Khaksari, a guidance counselor at a Howard County high school says, the responses collected here are not shocking or surprising to her in the slightest.  They are “a micro evaluation of the macro issue,” she says.

Khaksari says that parents can start a conversation with their teens on this issue by removing “the anxiety” teens often associate with talking about underage drinking.

“Approach it openly, honestly and genuinely” she says. “Punishing them for their open honesty is not going to get the conversation moving.”

The teens who do drink see it as a stage of life rather than a major issue, Maria says, adding that the decision to partake in teenage drinking may be more thought out than parents expect. Today’s teens care about and consider the facts behind the issue, Maria adds, reiterating the view that as long as drinking is not an everyday occurrence, it’s not a problem.

“It’s all good as long as you keep the alcohol in the parties and are able to focus on schoolwork when necessary,” she says.

When Adranisha Stephens isn’t chasing down a story, she is traveling, blogging, photographing or spending time with family and friends. She has a bachelor’s degree in mass communication from Frostburg State University and a master’s degree in journalism/digital storytelling from American University.
Previous Bodies of Work
Next Love Your Mother 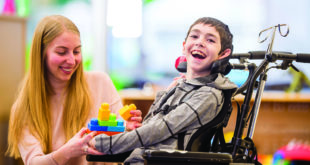 Childcare and Resources for Parents of Children with Disabilities