From its turquoise exterior to its bright green front door, Baltimore’s Creative City Public Charter School in Northwest Baltimore lets passers-by in on a secret: This is no ordinary public school. Inside and out, the school bursts with individuality, artistry and creativity. The hallways are dotted with murals and bulletin boards of student work. One board is covered with odes that students have written to objects in their community; another features two life-sized versions of students dressed in costume to promote the play they are writing, “The Merman and The Wizard.” Outside the art room there is a mosaic of Chesapeake Bay wildlife.

Each of the 300 children that attend the school had a part in creating this mosaic, from the graceful deer and beavers that were created by the dexterous hands of the fifth-grade class to the shells and rocks that kindergarteners crafted.

At Creative City, arts integration has completely come alive due to the work of Arts Every Day, a nonprofit organization whose mission is to make arts education a pivotal part of learning for all students in Baltimore City Public Schools.

“Arts integration” is one of those education buzzwords that often can be misunderstood. “Say in kindergarten you are learning the ABCs. In an art-integrated version of the lesson, the students not only learn the alphabet, but they learn what makes a song,” says Carla Blackwell, school and partnerships manager for Arts Every Day. “They learn what a quarter note is, what a whole note is, what a measure of music is.” Students then can create a song to help them remember their ABCs.

Here’s another example from Curtis Bay Elementary School. Early on a Thursday, third-graders in Victoria Hoffman’s class sat attentively, as they watched her explain the difference between 3D and 2D art. She held up her hand and laid it out flat, explaining that the flat hand was 2D. She then balled her hand in a fist and explained that this was 3D, because it can be walked around. After this lesson, students created a piece of 3D art — plaster casts of plastic hands and faces.

“They haven’t had art here at Curtis Bay for a very long time,” Hoffman says. “Arts Every Day and the grants we receive per child has allowed art to come back.” And that, she says, has changed the environment at Curtis Bay, where kids previously “took out their anger on the bulletin boards.”
“Now they have ownership and pride in what they create, and it is a happy place to come every day,” Hoffman says.

Teachers like Hoffman are all provided with professional development, which shows them how to teach lessons rooted in arts. These training’s allow Arts Every Day’s school partners to be completely educated on new subjects, so they can enrich their students’ lessons.

However, not every teacher can be an expert on every component of arts integration. In these cases, schools look to the partnerships that Arts Every Day has developed with more than 500 local artists since the nonprofit’s beginning in 2005.

On many Thursday afternoons in Sarah Brown’s second grade classroom at Creative City, Molly Cohen, a volunteer from Baltimore Center Stage, a partner of Arts Every Day and an experienced performer and designer, helps the students write a play. As Brown sits alongside her students on the carpet, Cohen reads the play the children have written so far.

The plot revolves around a dragon, whose egg has been stolen and blames the zombies for the thievery. Now, Cohen asks, “What needs to happen after the lava comes out of the volcano?” “The dragons need to melt all the zombie’s swords!” one excited student interjects. “No, the panther needs to help them escape, and has to admit it stole the egg,” another student says.

It’s because of teacher and artists like Hoffman and Cohen that Arts Every Day is able to carry out its mission of arts integration, says Julia Di Bussolo, the organization’s executive director. “There is so much wonderful arts integration and creative work going on in Baltimore city schools and this would be impossible without the amazing teachers we have. If there are no dedicated teachers, there would never be quality integration.”

Arts Every Day began when Baltimore was chosen as one of eight cities in the United States to receive a part of the Ford Foundation’s Arts Integration and Education Reform Initiative. This led to the formation of a coalition with the City of Baltimore, local artists and teachers, and the Baltimore City Public School System, which became Baltimore Partners for Enhanced Learning. In 2007, the coalition was renamed Arts Every Day. Since then, Arts Every Day has taken off. More than 17,000 students are involved in 150 programs funded by the group. Students also had the chance to be featured in the “10×10” exhibit at Motor House, which ran through Feb. 28. For this exhibit, Arts Every Day partnered with Baltimore Ceasefire 365, an organization that aims to end gun violence and promote peace in the city.

Next month, Arts Every Day will host the Arts Integration Showcase at the Sculpture Garden at The Walters Art Museum. The showcase runs from April 22 to May 5. Not surprisingly, there are many teachers and students looking forward to it.

“It is a platform which highlights both the arts integration lessons teachers from our partner schools implement that school year and the artworks students produce as a result of those lessons,” Blackwell says. In other words, it will be a great show.

When Adranisha Stephens isn’t chasing down a story, she is traveling, blogging, photographing or spending time with family and friends. She has a bachelor’s degree in mass communication from Frostburg State University and a master’s degree in journalism/digital storytelling from American University.
Previous ‘No Shushing Allowed’
Next Crash Course in Car Seats 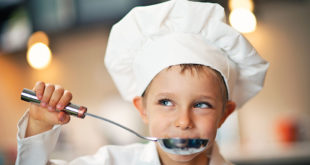 My Turn: Let Your Kids Pursue Their Passions Don’t be afraid to nurture creativity in all forms