Hockey in This Lacrosse Town? A slick sport gains traction, notably among girls

Youth sports in the DMV have long been ruled by lacrosse and soccer. However, kids around the area have taken a shine to ice hockey, a sport that their Mid-Atlantic parents may have had little opportunity to play.

Today’s hockey programs are attracting a diverse group of young players and families, and as more girls’ programs emerge and players join from a variety of ethnic backgrounds, the future of hockey below the Mason-Dixon Line continues to get brighter. Throughout the last decade, big changes have been made in hockey — especially for girls.

Joanna Nagle, an under-14 girls’ team coach for the Baltimore Stars, a youth hockey program, has been playing hockey for the past 16 years. When she was growing up, there weren’t many teams or clubs for her and her friends. Now she is amazed by how many girls’ programs are thriving.

“These new programs give girls the ability to build a little more camaraderie, and they are able to have fun and just be girls,” Nagle says. “It’s been amazing just to see how many girls’ programs have started up and continue to change the stereotype that hockey is a male-dominated sport.”

To understand the sport’s new popularity, consider that this summer, Nagle will be one of two coaches who will host “Girls Night Out” skates for hockey players each month, from May to August, at the Reisterstown Sportsplex. Not only is hockey growing, but like lacrosse, it is becoming year-round. After Team USA won the women’s ice hockey gold medal at the 2018 Winter Olympics in South Korea, little girls all around the country had an increased interest in learning to play this competitive icy sport.

“The Olympic victory has encouraged girls to shoot for the stars,” says Megan Donahue, head coach of the under-12 girls’ team for the Stars.

Donahue feels that the Olympic victory not only inspires girls who play hockey, but it also inspires young girls all over the country to take a chance and try something new. “They are able to look around and say, ‘Wow, that’s incredible, I see a girl who looks just like me, and I want to play that sport,’” she says. “That’s what all coaches should support.”

Also contributing to the growth of hockey and diversity in both the men’s and women’s game is Hockey is for Everyone, a National Hockey League-run initiative in which the main goal is to use the NHL’s platform and influence to positively change and foster more inclusive hockey communities.

One proud hockey mom is Jen Zamchiya, an African-American, whose 11-year-old son, Taurai, plays for the Fort Dupont Ice Hockey Club in Washington, D.C. Zamchiya believes the Hockey is for Everyone initiative has helped make hockey a more diverse and inclusive sport.

“Teams are encouraged to help make hockey accessible and affordable to groups who have traditionally shied away from the sport because of the ‘we don’t do that’ attitudes and expenses,” Zamchiya says. “[The initiative] has helped break down those barriers through the donation of equipment, funds for ice time and free or low-cost introduction to hockey clinics.”

As a result, teams are more diverse than ever before. Donahue says she is proud to coach a team filled with players from different racial backgrounds.

Nagle agrees. “To be able to see different races on the Stars and on the different teams we play has been really impressive and really inspiring.” Hockey also teaches young players, boys and girls, the importance of teamwork, setting goals and having fun. It gives them opportunities to play with players of different skill levels and learn how to succeed as a team.
Each time Zamchiya’s son steps foot on the ice he practices different techniques. “He learns something new each time,” she says, and he loves it.

Nagle has seen hockey give her players heightened levels of self-esteem as well as new friendships. “It instills so much confidence in the girls,” she says. “They are out there every day trying to learn a whole new way of mobility, and this confidence is built from meeting new girls who are learning this new sport that is crazy and awesome.”

To all the young girls and boys who want to play hockey or any other new sport, Nagle says, “just try it. You won’t know the rush and the fun and the camaraderie that comes with it until you just take the plunge.”

*Adranisha Stephens contributed to this story.*

When Adranisha Stephens isn’t chasing down a story, she is traveling, blogging, photographing or spending time with family and friends. She has a bachelor’s degree in mass communication from Frostburg State University and a master’s degree in journalism/digital storytelling from American University.
Previous Crafted Tales
Next Hop to It! 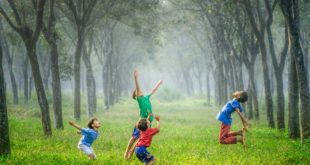