Love Yourself Healthy body images start with us

As the mother of two young women, I have learned some lessons when it comes to body image. Many of those lessons were taught the hard way by my daughters.

The fight to stay slim starts at an early age. When Paige turned 8, I could tell that as her body was preparing for the pubescent days ahead, she was starting to go from a slim child to one who was really filling out. At some point, it started to bother her. So I sat her down and talked to her about reading the labels on the foods that she was eating and about not snacking on everything put in front of her. This was received well, and while she did make it a point to look at how much salt or sugar was in something, she did not become obsessed. When Grace entered the same phase, I did the same thing. However, she spent a lot of time with her grandmother who loved to give her buttery, sugary and carb-filled goodies. Grace did not turn them down. From age 7 to about 10, we shopped for her in what stores called the “husky” section. This practice became more difficult once she entered middle school. She wore a uniform, but on the days when they could wear other clothes, she found herself feeling like an outsider comparing herself to girls in her class who were much slimmer.

The year her sister went away to college, Grace started high school. Body image was very much on her mind. All of a sudden she cut out snacking. It seemed all she would eat were carrots, celery and salad. The weight came off fast, and she was happy with her body, but I was worried she was starving herself. Both of my girls were victims of a mother who was on television. When out with me in public they would watch people come up to me and tell me how much bigger television made me look.

People would comment, “You’re much smaller in person.” The girls could see how that made me feel. And they heard me comment about how I looked “fat” in certain clothes. Once the two were confident in their own bodies, they would get angry with me for saying that. They both told me that it set a bad example and made them question their own body image.

Paige says I have always been insecure about my body, and it has rubbed off on them.  Grace says, “You always tell us that you think you look fat or comment on some aspect of your appearance. It’s a problem because if you think that about yourself, then your children will start to think the same about themselves. Not only is it annoying, but it’s toxic. Instead of commenting on the negative parts of your appearance, comment on the good parts. Or explain to your children that it’s OK that they don’t always look or feel good.”

For Grace, who is now in college, being away at school was a challenge at first because she had put on some weight in the first year, and she got hurt by what others were saying about her. But by summer, she was determined to transform herself, and she did it with hard work — exercising and eating well. She took a lot of selfies of herself, which I found annoying. But once she told me that it helped her validate the progress she made, I stopped complaining. She has stuck to her eating and exercise goals, and I can tell she feels good about herself.

It doesn’t take much for women and girls to feel badly about their bodies because society is always showing us what is supposed to look good.

Grace now admits she wished she had been more conscious of the food she was eating. “I think growing up, I had mixed influences. Dad would let me have sweets and fried food, and you would try to give me healthy foods because you were worried about my size and health,” she says. “So as a child, I had inconsistencies, and even when I ate healthy meals from home, I was still going to get Burger King with dad. So parents should make sure they are consistent with the food they put out if they are worried about keeping their kid healthy.”

Paige now says she was always aware that she was never going to be a thin girl. “I’ve always been naturally thicker,” she says. “As a kid, I noticed where my baby fat sat on my body. Coupled with magazines favoring thin girls with fair skin and blonde hair or straight hair, I understood the standards of beauty. I had my fair share of body-image issues. I think it’s just hard because the prevailing trends at the time can inform how a girl should feel about her body.”

Paige admits it’s hard for those negative feelings to go away. But now that she is an adult, she knows now how to cope with them better.

“Focusing on whether I think that my body makes me feel good is the priority these days,” she says. “When I was a kid I didn’t get that so much. Playing sports my entire life also taught me how to take care of my body and to prioritize fitness and healthy eating to maximize and optimize my body’s health and well-being. It’s a no brainer for me today. My body feels best and I feel that it is functioning best and looks best when I eat healthy.”

Body image is a work in progress. Help your children have healthy eating and exercise habits. Eat well in front of them. Let them see you exercise. Exercise with them.  And by all means, do not fat shame yourself in front of them.

When Adranisha Stephens isn’t chasing down a story, she is traveling, blogging, photographing or spending time with family and friends. She has a bachelor’s degree in mass communication from Frostburg State University and a master’s degree in journalism/digital storytelling from American University.
Previous The Rise of the Study Drug
Next Mom Life 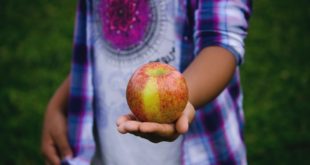