Katherine Lewis, a mom of three, volunteer and Girl Scout leader, was perplexed.

Kids today, it seemed to her, were more anxious, distracted and defiant. What was going on? She didn’t remember any of this behavior from her own childhood and found herself wondering “is this real,” she says. “Or just my own bad memory?” Lewis, a former national correspondent for Newhouse News Service, began to look into how our children behave and the result is her new book, “The Good News About Bad Behavior: Why Kids Are Less Disciplined Than Ever — And What To Do About It.”

The Rockville-based mom will be at The Ivy Bookshop on Wednesday, May 30 to read from the book and share some of its insights.

“This book grew out of me trying to understand,” she says.

Lewis spent five years researching the book which advocates for what she calls the “Apprenticeship Model,” an approach that focuses on collaboration and helping kids acquire the skills they need for a wide range of life situations.

One of Lewis’ starting points was a survey from the National Institute of Mental Health. Researchers there studied more than 10,000 U.S. children and determined that one out of two kids will experience a mood/behavior disorder or substance abuse by age 18.

ADHD, depression and anxiety are included in the category of mood/behavior disorder. Anxiety is the biggest culprit of the three with the study finding that it affects 32 percent of American children, Lewis says.

Delving deeper into the issue, Lewis came upon one of the book’s first takeaways: “Kids need more support in managing themselves.” Often when they act out, she says, it’s not out of defiance, but because they don’t have the know-how for that particular situation.

Why is that, parents might wonder. In the past three decades, three big changes in society have affected kids, Lewis says. They are the decline of unstructured childhood play, the growth of social media and technology and a lack of employment for children, which could mean no part-time job after school or no chore assignments in the home.

Many parents now have “wonderful goals” for their children’s academic, athletic or artistic achievements. But kids can also learn a lot from a job, she says.

“There is something so powerful about having to show up somewhere on time,” she says.  “Or doing their own laundry.”

Lewis offers two tips from the success stories in her book:

For more information on the author, visit katherinerlewis.com.

Jessica Gregg is the editor of Baltimore's Child. She is a happy rowhouse dweller and mother of two.
Previous B’More Social: May 24-27
Next 99 Days of Summer! 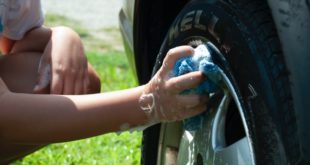